CPP are frozen platelets stabilized with DMSO, which can be stored frozen for 5 years, unlike standard platelets which can only be stored for 5 to 7 days. CPP is a complementary product to Cellphire’s next-generation product, Thrombosomes. Prior to clinical administration, CPP is thawed at 37°C, and resuspended with sterile 0.9 percent sodium chloride for injection.

Infusion must occur within 8 hours of preparation. The resuspended CPP product contains at least 1.7 x 1011 platelets in a volume of 45-60 ml.

The U.S. Army Medical Research Acquisition Activity (USAMRAA) awarded Cellphire with a multi-year contract to develop a U.S. Food and Drug Administration (FDA) licensed DMSO CPP product. As part of this contract, Cellphire is optimizing the manufacture of CPP and is conducting a Phase 2 clinical trial in cardiac surgery patients.

Advantages of CPP to Standard Platelets 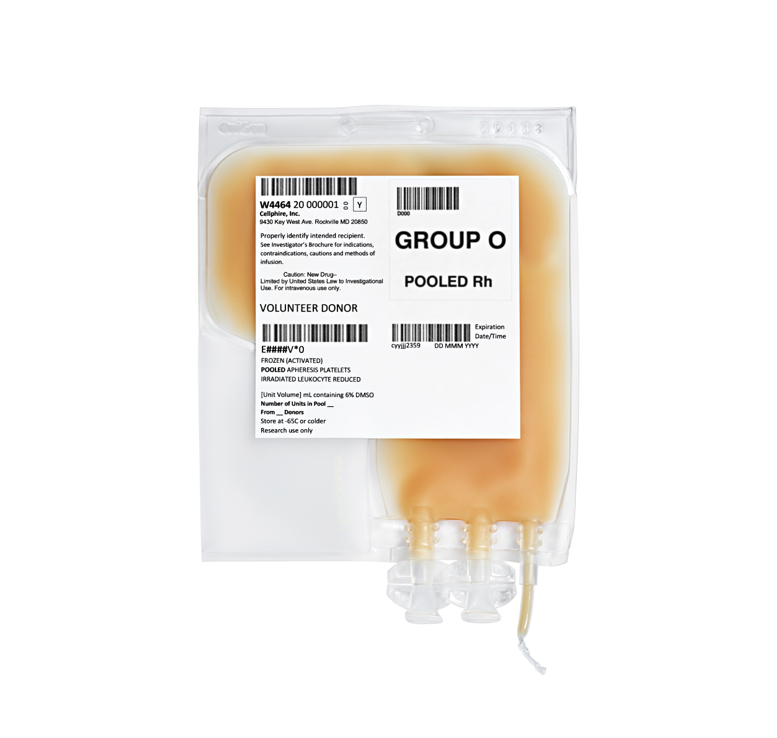 The Science Behind CPP

CPP is a frozen platelet blood product. It is composed of γ-irradiated leukocyte reduced apheresis platelets that have most of the plasma removed and are cryopreserved in 6% DMSO. They are stored at ≤-65°C for up to 5 years. DMSO works by entering the cell, changing the freezing temperature and reducing the formation of ice crystals that may damage the cell membrane. Depending on the amount of DMSO used in cell preservation, it may have to be washed out of the cells prior to infusing them in a patient. The platelet product being developed by Cellphire for the U.S. Army will not require washing because of the low amount of DMSO used.

The Dutch military created a blood bank of all frozen products, red blood cells, plasma, and platelets and deployed it to Afghanistan. They reported the product to be safe and efficacious after transfusing 1,143 units to 349 patients (Lelkens, et.al. 2006). Different versions of CPP are being used in military medicine around the world (e.g., Australia, Netherlands, Belgium, Czech Republic, and others).

The safety and efficacy of CPP was recently evaluated in the United States in a Phase 1 sequential dose escalation, randomized, controlled clinical trial. Inclusion required WHO Grade 2 or greater bleeding in thrombocytopenic patients. No thromboembolic complications resulted from the transfusion of up to 3 units of CPP. All patients had bleeding stabilized or improved in the 24-hour period after CPP transfusion (Slichter et al, 2018). In a single, small randomized clinical study in patients undergoing cardiopulmonary bypass surgery, use of CPP during the post-operative period significantly reduced the required volume of other blood products compared to LSP (Khuri et al, 1999). Together, these studies support the safety and efficacy of DMSO CPP for continued clinical investigation.

This work is supported by the U.S. Army Medical Research and Development Command under Contract No. W81XWH20C0030.

The views, opinions and/or findings contained in this report are those of the author(s) and should not be construed as an official Department of the Army position, policy or decision unless so designated by other documentation.